After a week of wet weather only two games were unable to start due to a waterlogged pitch but the results do reflect the softness of the wickets.

Kashmir, Rising Star and Rajpoot all maintained their unbeaten run after the completion of the 4th game of the season with Whiterose, Punjab, Wakefield Stars, Indus Ghari and Kings XI lahore all in second place in their respective sections, maintaining the pressure on the leaders.

All the games in the Star Section recorded some of the lowest scores of the season for all the fixtures which clearly indicates the ball wasn’t coming onto the bat as expected.

As we approach the end of the month of Ramadan the games from next week will now move to 40 overs with each bowler limited to 8 overs. The points system will also be adjusted to reflect the change and further information will be available later this week.

Highest Innings score – Rising Star : 259 for the loss of 6 wickets 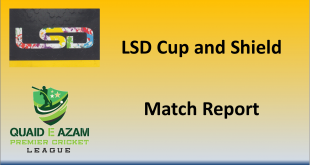