The Quaid e Azam Premier Cricket League surpassed 400 new player registration, as of last Thursday (27th May) 414 players were registered since the start of the registration period. The success of the attraction to member clubs also comes with it own challenges as players fight for their place for the first XI teams which ultimately improves standards.

Dewsbury and District Cricket League also surpass their own milestone as 108 players have been registered since the registration system opened late April 2021 as at last Thursday.

Well done to all the members clubs serving teas in a Covid safe environment, a special mention to Leeds Stallions who went one further by asking their catering supplier to pack the biryani dish in a sealed foil container making it easier to serve outdoors and mitigating any risk.

A mix bag of results reflecting the glorious weather after 4 weeks of continuous rain and difficult conditions. Not a cloud in the sight and winning the toss may not have given the results one would expect with the combination of a dry day and wicket.

The match of the day in the Premier Section between Kashmir and Whiterose played at Elland CC was won by Kashmir by 7 wickets and extends their lead at the top of the table, whilst third place Bhalot also moved closer to second place as they claimed maximum points by securing a 154 run win over Khan. The game between Darulshafa and Diamond was the highest scoring game in their respective Section as they racked up 570 runs between them in 80 overs averaging over 7 runs per over. Darulshafa elected to bat first and scored 296 for 4 with a century for Waleed Akhtar (124) and Awaise Hussain (101), Diamond chased well but unfortunately fell 22 runs short of the target. The match against AK Eagles and Subhan was a low scoring game and AK Eagles won it comfortability by 52 runs. The game between Karmand and Bradford Moor was also a low scoring game, Karmand won the game by just three wickets.

Rising Star continue their unbeaten run as they beat Northcliffe and extend their position at the top as both Yorkshire Lions and Indus Ghari lost today. As we pass the first third of the season Rising Star seem to be the favourites to gain a place in the play offs in their respective section. Both Kings XI Lahore and Leeds Stallions had easy wins over their oppositions.

Rajpoot continue with their unbeaten run and extended their lead at the top along with Punjab who also had a easy win over Central Leeds. Heaton beat third place Wakefield Stars at home, whilst the local derby between Mylahore Tabs A and B was won by Tabs A. AQ Khan beat Khan 2nd XI by 140 runs.

The title fight went to the last game between PKWA and Friends XI. PKWA batted … 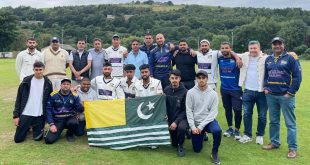