Not the best day for cricket as we had overcast conditions, temperature falling below 10C and rain towards the end of the games. Not the type of start we were looking for as the 2nd round of the Leeds Sign Design cup round took place today.

The rain was anticipated and some clubs reduced the number of overs to ensure the games was completed before the rain arrived.

Both Friends hosting Leeds Stallion at Almondbury CC and AQ Khan hosting Diamonds as Allerton Bywater CC didn’t make a start today due to wet outfield. Rajpoot experienced the first defeat today this season as they lost by 2 wickets to Northcliffe, hattrick from Saqib Mehmood restricted Rajpoot to 155. Northcliffe chased the score with a contribution from Istaraj Khan (64) to secure a place in the Quarter finals against Kashmir.

Whiterose had a comfortable win over Rising Stars who also lost their first game of the season. The dropped catch for the tenth wicket mostly likely cost the match as Rising Star try to chase a target of 142. Rising star did well to restrict Whiterose to 142 and it could have been a lot lower. The disciplined bowling of Whiterose was just too much for Rising Star to get a good start early in the innings and lost wicket periodically, eventually they were all bowled out for 85. Whiterose will now play the winner of Friends and Leeds Stallions.

The low scoring match between Kashmir and Bradford Moor was played at Crofton Phoenix Cricket Club, Kashmir beat Bradford Moor by 6 wickets and will now play Northcliffe away.

Heaton Park played away at East Keswick against Central Leeds, Heaton Park batted first and scored 177 for 7 with contribution from Nabeel Anjum (56), Central Leeds were restricted to 133 before being bowled out. Adam Hussain (66) performed well for Central Leeds but didn’t get the support to secure a win for his club. Heaton Park will now host Bhalot in the Quarter Finals.

Man of the match Arsaam Malik (101) helped secure his club Darulshafa a place in the Quarter Finals as they beat Karmand by 26 runs, Darulshafa set a target of 172 in their 30 overs and in return restricted Karmand to 146 for 9. Darulshafa will not play the winner of AQ Khan or Diamonds.

Bhalot hosted Wakefield Stars at Normanton CC and restricted them to 142, Bhalot chased the score with the loss of 5 wickets. Performance with the bat from Adam Patel (68no) help secure a win to the Quarter finals. 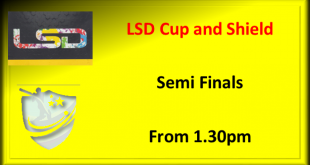